Undefeated two-year-old one of four impressive winners for Astern over the weekend!

Oxymore made his Stakes debut a winning one when he outdueled No Nay Hudson in the stretch to take the Skidmore Stakes by just over a length at Saratoga on Friday, August 19.

The two-year-old gelding by Astern his first start for his new connections who purchased him privately after his six-and-a-half length romp in his debut at Belmont Park in July. Now trained by Eclipse Award winner Chad Brown, Oxymore remains perfect in two career starts.

Oxymore showed good speed out of the gate and immediately was sent up to dispute the early pace alongside Jeremy’s Jet (Street Sense). Oxymore shook off Jeremy’s Jet on the far turn but was soon joined by No Nay Hudson at the five-sixteenths pole. That duo matched strides through the final sixteenth of a mile, with Oxymore finally getting the better of No Nay Hudson nearing the wire to post the victory.

The juvenile was one of four who found the winners circle over the weekend for her sire which saw two at Del Mar and another juvenile at Canterbury:

From his first two crops to race, Astern has sired 12 Stakes performers to date in both North America and Australia, including Sail By (G2W), Seradess (G2W), Brigantine, Arnaqueur, Main Stay and Danger Strykes. 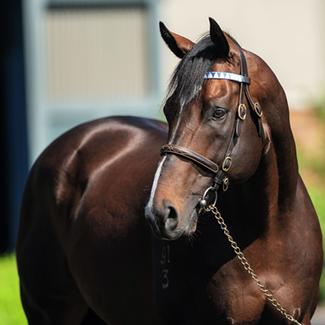