Royal Ship made his first start in eight months a winning one with a dominating, six-length victory in the Listed John Shear Mile at Santa Anita on Sunday, 10 April.

After a poor showing in the G1 Pacific Classic last August, the Midshipman gelding was found to have inflammation in his hind suspensory ligaments and was given some time off by his connections. He had recently returned to trainer Richard Mandella’s barn and had been training extremely well for his return.

Already a G1 winner in his native Brazil, Royal Ship quickly became one of the top older horses in the U.S. after a victory in the G2 Californian and placings in both the G1 Hollywood Gold Cup and G2 San Diego Handicap. His sharp victory in the John Shear Mile, which he won while under wraps by jockey Mike Smith, signaled that he once again will be a major player in the older horse category.

Midshipman’s 17% career Black Type horses from starters continues to be among the best in the business. In addition to Royal Ship, Midshipman was also represented in 2021 by Stakes winners Special Reserve (G2), Naval Laughter (G3), Kopenhagen (G3) and Listed winner, Averly Jane.

Midshipman is standing the 2022 breeding season at Jonabell Farm for $10,000, stands and nurses. 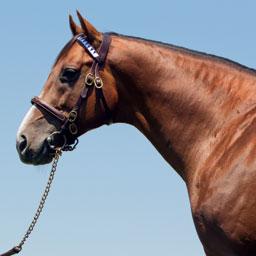