Renegade Rebel took the lead right out of the starting gate and had just enough left in the tank as she prevailed by a neck over stablemate Ryder Ryder Ryder to win the G3 Mazarine Stakes at Woodbine on Saturday, 26 November.

The daughter of Nyquist, who made her Stakes debut in the Mazarine, had broken her maiden by seven lengths in her previous start in October.

Renegade Rebel broke alertly and was put on the lead by jockey Rafael Hernandez, while Honor D Lady and Collect Dattt followed in second and third, respectively. State of Mind was raced in fourth and Ryder Ryder Ryder, who broke in the air, was last.

Renegade Rebel opened a two-length lead on the field after a half-mile and extended that to three as the field raced through the far turn and entered the homestretch. The grey filly then saw her lead shrink considerably, as both Ryder Ryder Ryder and Honor D Lady came running late, but they both ran out of real estate as Renegade Rebel held on to win by a neck.

A $700,000 purchase at the 2022 OBS April Two-Year-Olds in Training sale, Renegade Rebel was bred in Kentucky by Shadwell Farm. Her dam, Hasilah (by Hard Spun), is out of Sierra Madre, winner of the G1 Prix Marcel Boussac and G1 Prix Vermeille. Hasilah is a half sister to Aljabr (Storm Cat), European Champion two-year-old colt and winner of the G1 Sussex Stakes, G1 Juddmonte Lockinge Stakes and G1 Prix de la Salamandre. 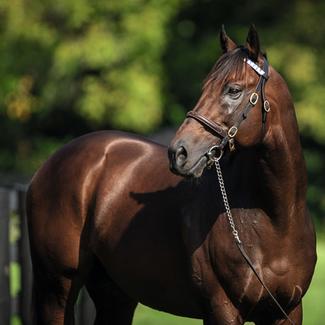