Becomes only the seventh Champion juvenile to repeat at three

Following Essential Quality's G1 Travers win, Brad Cox stated, "He's very, very special. He really is. It's hard to explain what it feels like because words can't describe it...This horse is a first-ballot Hall of Famer," he added. "He's a great horse and you're not going to get horses like him every year. A horse like him is few and far between." Strong praise from one of America's top trainers, but with his body of work, Essential Quality made it quite easy to achieve numerous accolades as well as the industry's top awards.

On February 10th at the 51st Eclipse Awards it was more hardware and more achievements for the now four-year old son of Tapit as he was voted the Champion three-year-old colt of 2021. He was previously named the Eclipse Champion two-year-old of 2020 following G1 victories in the Breeders' Futurity and the Breeders' Cup Juvenile.

During his championship three-year-old season, Essential Quality didn't waste time in returning to his winning ways with victories in his first two starts of the year in the G3 Southwest Stakes and the G2 Blue Grass Stakes. Denied a Classic win with a troubled trip in the Derby, he then reeled off three consecutive wins in the G1 Belmont Stakes, the G2 Jim Dandy and the G1 Travers.

Retiring with eight wins in 10 starts (and a third in the G1 Breeders' Cup Classic), Essential Quality never missed a training day during his illustrious career, while racing only on only hay and oats, and culminating in his second Eclipse Award. That feat places him in rarified air as only one of seven colts in the 51-year history of the awards to win Eclipse Awards at two and three:

Although that fact, in of itself, separates "EQ" from the rest of the pack, there are a couple more unique achievements that add to his distinguished record:

Racing in the blue silks of Godolphin, Essential Quality showed his diverse talents winning from six furlongs to a mile and a half, including G1 victories at eight and a half furlongs, 10 furlongs and 12 furlongs.

As of this writing, he has proven very popular at the start of his next career and is booked full for the 2022 breeding season. 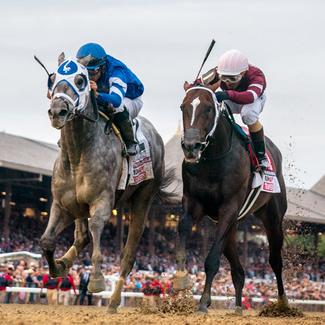