Aloha West returned to the winner’s circle for the first time this year when he gamely held off Miles Ahead by a neck to win the Kelly’s Landing Overnight Stakes at Churchill Downs on Saturday, 2 July.

The victory was the first in three starts so far this season for the five-year-old son of Hard Spun, who entered the race off two solid performances in both the G1 Churchill Downs Stakes and the G1 Metropolitan Handicap. Aloha West capped off 2021 with a memorable victory over Dr. Schivel in the G1 Breeders’ Cup Sprint at Del Mar.

Despite getting bumped coming out of the starting gate, Aloha West raced closer to the pace today, as jockey Joel Rosario settled the dark bay into third, right behind the leading pair of Kneedeepinsnow and Miles Ahead as he saved ground along the inside rail. Aloha West continued to scrape paint along the rail through the far turn, when he was tipped to the outside for a clear run in the stretch. Under strong urging from Rosario, Aloha West reeled in the leading duo and kept Miles Ahead at bay nearing the wire to earn the victory.

Aloha West was bred in Maryland by Robert T. Manfuso and Katherine M. Voss, and is out of the Speightstown mare, Island Bound, winner of the G3 Winning Colors Stakes. Second dam Indy Mood for Luv is a multiple Stakes-placed half-sister to Graded Stakes winners Savorthetime (G3) and Rogue Romance (G3).

Aloha West was the second Stakes winner of the day for stallion Hard Spun. Earlier in the day his daughter Sparkle Blue captured the Christiana Stakes at Delaware Park. Hard Spun is also the sire of 2022 Stakes winners Exotic West, Green Light Go and My Philly Twirl. 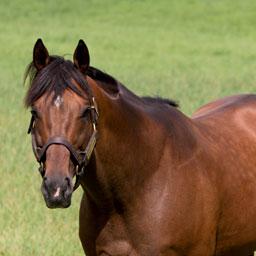