Desert Party and Girolamo: Exciting young stallions with all the makings of sires of the future

It’s not too often that a horse merits both the pedigree and conformation to command an auction price in excess of seven figures ($2.1 million to be exact). It’s even less often that kind of horse goes on to achieve success on the track. Look no further than Street Cry’s son Desert Party for a stallion that ticks all those boxes and more.

Produced from the Tabasco Cat mare Sage Cat, Desert Party looks to follow in the footsteps of fellow Darley stallions and “half-brothers” Street Sense and Street Boss, two other sons of Street Cry who have quickly established themselves as successful sires of the day.

Desert Party graduated first time through the sales ring at Keeneland September in the fall of 2007 as a $475,000 yearling and then blossomed into a physical standout at two. He was ultimately purchased by Sheikh Mohammed at Fasig-Tipton’s Florida February sale of two-year-olds in training in 2008.

His first foals will be headed to the yearling sales this year and what physical specimens they are. The term “stamping his foals” is sometimes overused, but in this case, it really is the perfect term. Just take a look at some of them below and see more in a slide show by clicking here. 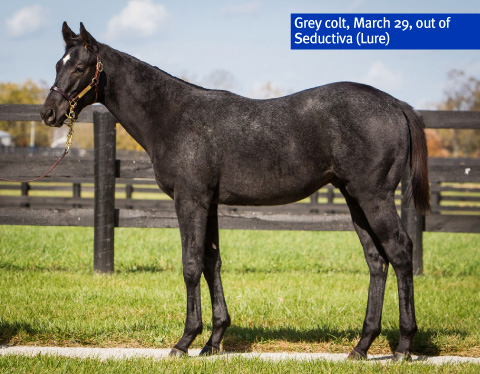 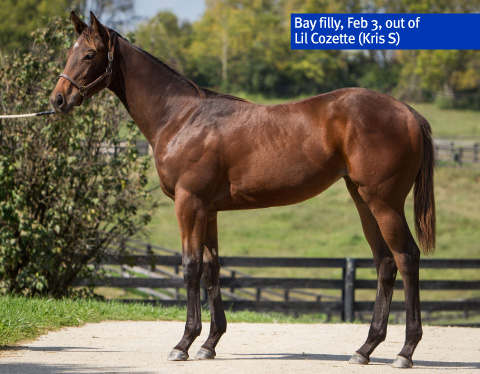 Since he’s been at stud, Desert Party has attracted the attention of many of North America’s top breeders, exemplified by the quality of mares in his first books. Collectively, these mares, their foals and/or their half-siblings reflect nearly 275 stakes horses, nearly 200 of which won stakes events. Included are such names as G1 winners Maria’s Mon, Silverbulletday, Lakeway, Dahar, Tinner’s Way and Ginger Punch.

In his first career start, Desert Party showed signs of brilliance, and although he broke from post position 10, he quickly found his stride and proved much the best winning by three and one-half lengths over Arlington Park’s Polytrack.
After just a little over one-month’s time, he found himself once again on the winning end with an impressive victory in the G2 Sanford Stakes over Saratoga’s muddy, main dirt track. His list of defeated foes that day included the multiple G1 winner Vineyard Haven.

At three, Desert Party travelled to Dubai where, at Nad Al Sheba race course, he won three of four starts early in the year, emulating his great sire in both the G3 UAE 2,000 Guineas and G2 UAE Derby. At four, Desert Party was victorious in two of three starts – the G3 Mahab Al Shimaal at Meydan race course, also in Dubai, and a 100+ Beyer performance in the Donald LeVine Memorial Handicap at Philadelphia Park which would be his final career start. Desert Party boasts six victories from 11 career starts with one second. His total earnings were $928,467.

On his retirement to stud, Darley COO Olly Tait expressed, "This is a horse that we felt was headed for Grade I success. Physically, he is a fantastic individual and we're very excited to have him join our roster." This statement was somewhat prophetic as in 2011, he was extremely well received in his first year with a book of mares that totaled 121. Given the early returns on Street Sense’s first crop at the track, look for this other son of Street Cry to make his mark beyond the breeding shed as well.

Another young gun standing at Sequel Stallions in New York for 2012 and 2013 is G1 Vosburgh Stakes winner Girolamo, another promising sire who’s attracting the attention of top breeders. His first book reflected 53 stakes winners/producers and half-sister to 65 stakes winners, 33 Group or Graded, including G1 winners Unbridled's Song, Anabaa and My Flag to name a few.

A son of A.P. Indy. A winner of a G1 sprint at six furlongs. A Graded winner at one mile. And from a tremendous family packed full of blacktype. Add it all together, and you’ve got all the makings of a sire of the future.
Girolamo holds the rare distinction of being the only son of A.P. Indy to win a G1 stakes at six furlongs, a feat that not even the likes of his Darley stable mate, Bernardini, could do, nor Malibu Moon, Pulpit, Congrats or Mineshaft. But these are just a few of the other sons of A.P. Indy currently making a name for themselves at stud, all among the nation’s leading sires and each the sire of G1 winners.

Girolamo was a G1 winner of five races all on the tough New York racing circuit, including the six-furlong G1 Vosburgh Stakes, and distinguished himself with a unique ability to carry his speed in Graded victories up to a mile. He was an impressive winner in his debut at Saratoga as a two-year-old but his sophomore season was even more exciting. He reeled off three wins in succession culminating with a victory in the G2 Jerome Handicap in which he registered a Beyer Speed Figure of 107.

But it was at four when Girolamo showed his true mettle. The Blood-Horse called his Vosburgh win “decisive” prompting jockey Alan Garcia to say, “When we came around the turn I started looking for a place to get out because I didn’t want to be stuck on the inside. Towards the end of the race he was in hand and just cruising. In the end, he showed his class and won the race." He ended his career with a fast-closing third in the G1 Cigar Mile, a race in which he registered his career-best Beyer of 110.

Girolamo descends from a tremendous family of Phipps-bred progenitors of champion Numbered Account (dam of the very successful sire Private Account) and Rhythm just to name a few. In fact, he is out of the Mr. Prospector mare Get Lucky, a G3 winner who is a full sister to champion and Breeders’ Cup winner Rhythm. Get Lucky is also the second dam of 2010 Kentucky Derby winner Super Saver, millionaire and G1 Haskell Invitational winner Bluegrass Cat, as well as Graded winners Lord of the Game and Brethren.

Girolamo is a full brother to multiple graded winner Daydreaming, G3 winner Accelerator, Super Saver's dam, Supercharger, and a pair of other stakes-performers.
To find out more about Desert Party or Girolamo, please call a member of our nominations team at (859) 255-8537.